This letter, written by Harold Freedlander of Wooster, Ohio during the four years in which he was enlisted in the Army during World War II, looks at why the Germans are still fighting, even when he (and he presumes the Nazis as well) know that there is no way that the Germans could win. He says that they are no longer fighting Germany but National Socialism. Freedlander then goes on the relate this back to the Jacobins during the French Revolution. At such a late time in the war (less than a month away from official victory in Europe), the fight was about National Socialism, the principles it stood for, the way that it conducted government, and the possibility of a continuation of it. Similarly, the Jacobins in the French Revolution held control often by much political violence and radical legislation. This comparison made by Freedlander might be attributed to his degree in European History from Harvard College prior to his enrollment in the Army.
Use Ohio Social Studies Standards for American History 22 (The United States mobilization of its economic and military resources during World War II brought significant changes to American society) for integration into the classroom.
Use Ohio Social Studies Standards for Modern World History 8 (Enlightenment ideas on the relationship of the individual and the government influenced the American Revolution, French Revolution and Latin American wars for independence) and 15 (The consequences of World War I and the worldwide depression set the stage for the Russian Revolution, the rise of totalitarianism, aggressive Axis expansion and the policy of appeasement, which in turn led to World War II) for integration in the classroom.

I'll Be Back by Harold Freelander 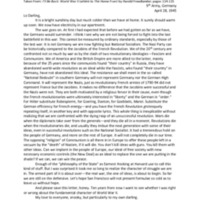