This letter, written by Harold Freedlander of Wooster, Ohio during the four years in which he was enlisted in the Army during World War II, discusses his knowledge of what is happening back in home. Freedlander discussing the takeover of the Cleveland Electric Company by the federal government because of a strike by its workers. Freedlander goes onto discuss how he took quite a bit of heat about it, being from Ohio, from his friends that were with him. The federal government took over many business and factories during this time to divert their resources to the war effort, both abroad and at home. This allowed for the production of goods not only for the United States, but also its allies of France and Great Britain, both of which were lacking in goods as well.

Freedlander goes on to discuss and describe in great detail the money that he uses in Great Britain. While there was some provided to soldiers through the United States government and the Army, much of what a soldier may want or need has to be bought with the pay he receives for his service. A solider may buy anything from gifts for his loved ones at home to cigarettes to eating at a restaurant or going to a movie, some of which was more expensive overseas than it might be at home because of the low quantity of goods that was available. Freedlander found the money that Great Britain used to be fascinating and the price of his movie theatre ticket as well.

Use Ohio Social Studies Standards for American History 22 (The United States mobilization of its economic and military resources during World War II brought significant changes to American society) for integration into the classroom.

I'll Be Back by Harold Freedlander 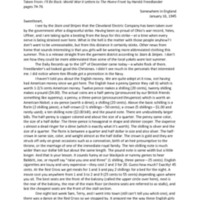