The industrial boom that was occurring at the turn of the twentieth century would give many people a higher standard of living, both by creating more factory and industrial jobs and also freeing many workers from the back-breaking work that was required before mechanization. In addition, many industrialists attempted to build their businesses as big as they could, rapidly expanding their business, as the Wooster Brush Company did with their new building in 1909. The expansion of industry would lead to people moving into cities and larger towns, or urbanization. The city of Wooster would flourish as many new companies, including the Wooster Brush Company would expand and need more workers during the industrial boom at the beginning of the twentieth century. 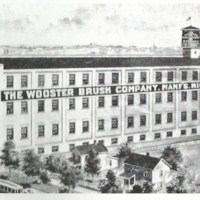