This letter, written by Harold Freedlander of Wooster, Ohio during the four years in which he was enlisted in the Army during World War II, discusses the outcome of the 1944 election, with Franklin D. Roosevelt elected to his fourth term as president. Freedlander discusses the boost in morale of the soldiers after his reelection, stating that if Governor Dewey would have won, it “would have certainly been regarded as repudiation by the people of our [soldier’s] war efforts.” The soldiers that were across the ocean, or even just those that were assigned at camps in the United States as Freedlander was at this time, were aware of what was happening back in the United States and it effected their morale. They wanted to know that what they were fighting for was also something that the United States citizens were supporting.

Freedlander also depicts how he saw how the world would turn out following the War. Freedlander was not too much off, with the United States and the U.S.S.R. becoming the two major powers in the world following the end of World War II. The one thing that Freedlander was unable to foresee was the different ways that the United States and U.S.S.R. would establish their dominance. The U.S.S.R. would attempt to gain control of all of Eastern Europe in hopes to stomp any further attacks from the west. The United States, with just as much (if not more) political and military power than the U.S.S.R., would attempt to establish a policy of containment of the communist rule that the U.S.S.R. was trying to spread. In the end, Harold Freedlander had predicted the Cold War almost a year before the War would officially end in Europe.

Use Ohio Social Studies Standards for American History 22 (The United States mobilization of its economic and military resources during World War II brought significant changes to American society) and 24 (The United States followed a policy of containment during the Cold War in response to the spread of communism) for integration into the classroom.

I'll Be Back by Harold Freedlander 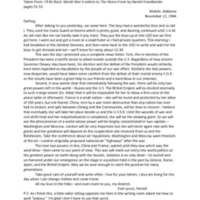